The queen of the beach – sexy shape. Part I

I have written a lot about training for women. Despite that, 90% of information on the Internet is misleading. Advertisements or myths, lies or half-truths distributed by the ladies themselves don't make it any better. Before I start describing particular types of workouts, I would like to remove the informational noise, which doesn't let you achieve your goals. You will do majority of work... in the kitchen, not at the gym.

You should definitely read:

The king of beach: sharp cut of fat!

Majority of the results in body fat reduction depends on the individually adjusted diet. It explains why most of the people don't succeed. If you don't have time or willingness to study this area, go to a dietitian, or use the offer of Afterworkout.com. Only the “genetically priviledged” people can let themselves do the strangest training or experiment with diet – they lose weight whenever they want, even when eating ice-cream. But majority of the ladies have to work hard to notice the slightest changes in their bodies. Because of the physilogical reasons, body fat reduction in women is a harder task than in men (minute amount of testosterone, naturally higher amount of body fat). The group of the “lucky ones” will include only a fraction of population, and the group of women with no predispositions will also gather small part of individuals. Don't look for excuses, just start working. First, I will write about women who will do anything to lose weight. Some are ready to die only to fit in their dream dress or swimsuit!

Are there any miraculous slimming pills? Yes, they can kill you!

You can still find the descriptions, advertisements and promotions of inefficient pills, wonderful supplements and harmful pharmacology. Women tend to still recommend CLA or l-carnitine to one another – even though their efficiency is very poor or none in scientific studies [1, 2, 3]. Why does it happen like this? Everybody is looking for the Holy Grail – shortcuts, pills for slimming.

In you opinion there are such wonderful products? Yes? So, why more than 1/3 of adult Americans are obese? Exactly, according to the CDC information, 34.9% (78.6 millions of people) suffer from obesity! [4] Out of that group, 30.3% are adults from the age group of 20-39 and 16.9% are children and teenagers! According to the estimates, there are 937 millions of obese people around the world! If there was a “slimming pill” - the problem of obesity would not exist, but it grows and is becoming more important!

More than one woman lost good health or even life because of the experiments with pharmacology. Like in the famous case of a woman from Warsaw, who died after using an extreme burner – DNP. 2,4-Dinitrophenol has killed tens of people – the information available in scientific data must be just the tip of the iceberg. For example, you can learn about the death of a 22-year-old [7]. The first person to be killed by DNP was a man in 1916 (his body temperature was 40.5 C degrees). [8]

In the mentioned study, there are 25 cases of deaths of people who used DNP for slimming reasons. As you can notice, DNP is deadly efficient...: 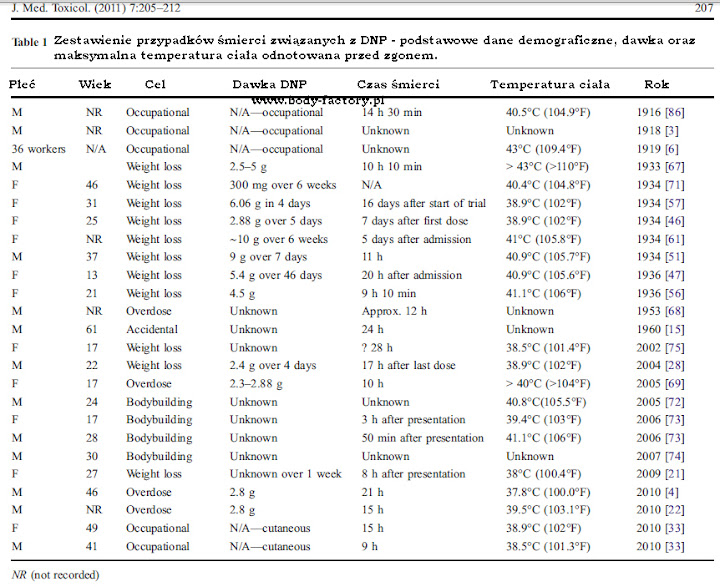 The record-holders from that list, at the moment of death, had their body temperature on the level of 43 C degrees! Women often look for some pills from the illegal market, e.g. the imported adipex from Czech Republic. Some desperates use clenbuterol (beta-mimetic, which may be efficient, but until the moment of your hospitalisation). [6]

Solution: stop looking for sortcuts, there aren't any of those. Even when using pharmacology, you have to wait for the results for months. People work for their bodies for their whole lives. You also worked for the body fat yourself for years. You think that you will remove that fat in 2 months? Some miracle will happen? Many products available on the black market may make you go to the hospital, and some of them, like DNP or clenbuterol, may kill you.

How to lose 8 kg in one weekend?

You can read such assurance on the Internet, in magazines, perhaps you will hear it from your friend. Yes, it's true, such changes of weight are possible. But before you run to find some wonderful ways of doing that, I suggest a moment of thinking. It's good to remember that the loss of body weight doesn't mean ANYTHING. I can even tell you how to lose 5-8 kg of weigh during one weekend. The MMA competitors, as well as K-1 competitors, boxers, wrestlers or judokas – do it at all times, at least for the last 30 years. Why? Because they have to have particular weight at the precise moment before the fight – at the official weighing. What do they do? They train in too warm clothes, they go to the sauna, they dehydrate with pharmacology (e.g. diuretics), they use herbs and very strict diets, they limit the intake of liquids. All of those procedures bring effect – the weight decreases very fast. But how much body fat goes away this way? Nothing. Not even one gram! All of those actions are aimed at dehydration, the loss of body weight causes weakening, lower level of glycogen and water. It doesn't make any sense.